you are here: Home > News > Application of Grouting Reinforcement in the Subway Station Sewage Pipe

Application of Grouting Reinforcement in the Subway Station Sewage Pipe

Subway lines to try to pass a large passenger distribution point, the general should be combined with the urban road network and passenger flow to the situation, along the main roads and main passenger flow layout. Therefore, the impact of subway construction on the buried pipeline under the urban road pavement is inevitable. To ensure that the construction impact on the pipeline within the allowable range, to ensure that the pipeline is always in control of the construction process under the operational significance of particularly significant. For example, in Beijing, due to the limited level of productive forces and the allowable strata conditions, underground excavation is still the main method of subway construction. Compared with the shield method, this method is less costly, but relatively more flexible to the surrounding strata. Therefore, it is very important to deeply research the technology of adjacent pipeline safety protection in the construction of metro tunneling method.

Zhengzhou Station is the middle station of Metro Line a10 and is located at the intersection of North Third Ring Road and Chaoyang North Road. It has a cross-transfer relationship with M6 line. Station along the North Third Ring Road was north-south direction, by the Beijing-Guangzhou Bridge piles, the platform set separately in the East Third Ring Road on both sides of the road, the depth of 10m, station 179.5m, starting point mileage K19 +795.566 ~ K19 + 975.066. The station has 5 entrances and exits, 2 sets of wind pavilion, air duct.

The station is a separate island station with a double-lane double-hole and double-deck structure. The effective station length is 120m and width (6.0 × 2) m. The section of the structure is single-arch single-span section, and the cross-section span of the standard island station is reduced compared with that of the standard island station. The width of excavation is 12.6m and the standard section excavation height is 15.15m. In this site and M6 line transfer node, the use of single-span straight wall cross-section form. Station using hole pile method (PBA) construction.

On the right of the right guide archway on the left, there is a sewer line distributed longitudinally along the station, with a pipe diameter of 1250mm and its inner bottom closest to the guide hole at a distance of 1285mm. The pipeline built in the 1970s, using pipe jacking process, perennial water flow, the average full tube rate of 50% or more, the peak displacement of 0.27m3 / s. Sewer pipe in the main line and the M6 ​​line intersection has an inspection well, number C, located in East Third Ring Road, East Side. Inspection well room high 3.1m, length × width of 2.6m × 2.6m, the bottom of the hole from the nearest to about 500mm, here is the focus of the construction, the difficulty.

The guide tunnel is now the standard section has been completed, both ends into the high section 7m, the remaining 34.2m not excavation. Due to the large diameter of pipelines, the rapid flow of water, the distance from the guide tunnel, the construction of a long time ago, at the same time the pilot tunnel section is high, and the construction safety risk is relatively large. During the construction of the pilot tunnel, effective measures will be taken to reduce the opening Dug to the surrounding soil deformation settlement, to ensure pipeline safety. 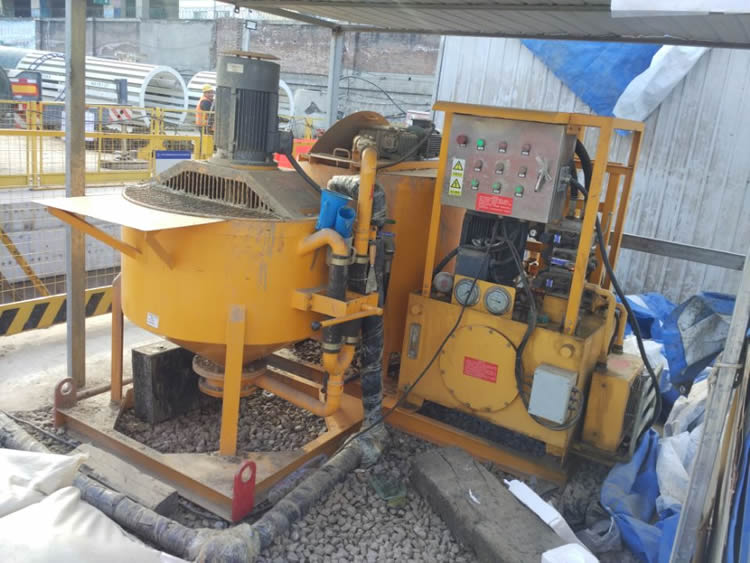 2.1. Proactive detection of the front of the formation

Before the excavation of the cross-section, three advanced pilot pipes are arranged on the side of the arch near the sewage pipeline, 4m in length. The pipes are pulled in by the pneumatic picks, and the frontal geological conditions are judged according to the seepage of the orifice and the soil quality in the pipelines, Water hole seepage (or flow) out of the hole, indicating that the sewage pipe leaks or water pockets in front of, then immediately close the face, under the tube cited row, such as prolonged water flow, then the sewage pipeline leakage serious, then Take pressure injection cement water glass slurry strata reinforcement, until the dive was all blocked up.

The sewer mainly leads to the domestic sewage in the neighborhood. When the flow rate is the largest, it is three periods of early, middle and late periods, avoiding the maximum period of water during the construction. Construction is strictly prohibited at night from 22:00 to 5:00 am the next day. 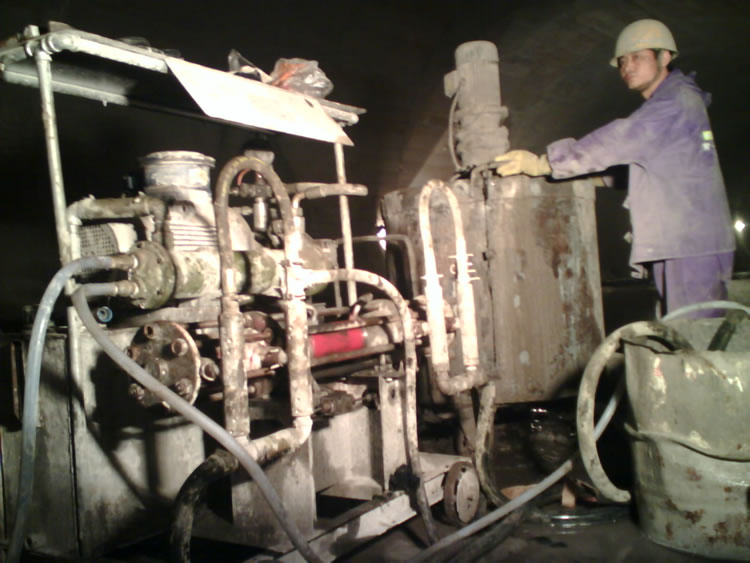 a. Drilling: After the drilling machine is in place, start drilling. When drilling, pay attention to that the boom of the drilling rig must be tight on the face of the palm to prevent excessive vibration. Rig should first low-speed drilling, hole depth of 30cm, before they can turn into the normal drilling speed. When drilling to control the amount of water to prevent collapse hole.

b. Due to the weight of the drill pipe, the drilling direction (especially at the vault and arch feet) should have a certain elevation angle. According to the design requirements of the drill hole, there is an extrapolation angle of 5 ° -10 °.

d. Pressurized water test: check the mechanical operation, the closed conditions of the pipelines and the slurry into the slurry pipe, the test pressure is generally not less than 1.2 times to 1.5 times the grouting final pressure, but also can be handled according to the construction site. Water pressure test should be carried out three times, each 5min. After the pressure test, let the water let go.

e. Grouting: After the water pressure test is completed, the grouting should be started without stopping the pump. When injecting, a certain amount of slurry should be injected before gradually increasing the concentration of the slurry. Slurry mix ratio according to soil type obtained through the test the best mix. Grouting time should adjust the grouting fluid that is the pressure, in order to achieve good results.

If you want to learn more, please contact us. Email:sales@wodetec.com